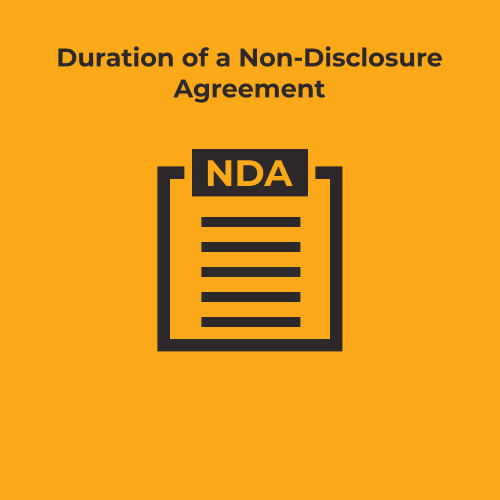 Duration of a Non-Disclosure Agreement

We comment on the duration of a non-disclosure agreement (“NDA”), in this Part 5 of the In-House Legal Solutions NDA Guidance Note Series.

It is quite common to see an NDA terminate on the earlier of an anniversary of the date that the NDA was entered into and the date that documentation to affect the transaction (which is the subject of the NDA) is executed by the recipient.

There is no standard term for an NDA, it will depend on the parties’ preferences, the specifics and nature of the agreement, the parties’ commercial relationship and a number of other factors. It is not uncommon to see a term length between 1 and 5 years, although the shorter the term, the more favourable this is to the recipient. Arguably the most important factor in determining the term length is the nature of the information being protected, whether this is trade secrets or ordinary business information exchanging hands.

After the expiry of the term, the recipient will be able to use and disclose the discloser’s information. Once information is made public in anyway, an NDA cannot be enforced.

If a term clause is not included in an NDA, the parties can imply that the NDA will continue indefinitely but a recipient will usually be reluctant to agree to an ongoing obligation with no end. It is sometimes possible to see an indefinite term hidden in the return and destroy clause in respect of retained information. If the recipient has a legal or regulatory obligation to maintain certain information, the NDA may provide for an exception for that information, but again this will usually be resisted by the recipient who will want to make sure that such confidential information that is retained remains subject to the terms of the NDA for the duration of the NDA only and not indefinitely.

In-House Legal Solutions can help you to ensure that your business needs are adequately protected when negotiating NDAs. For more information or to discuss this further, please contact [email protected].